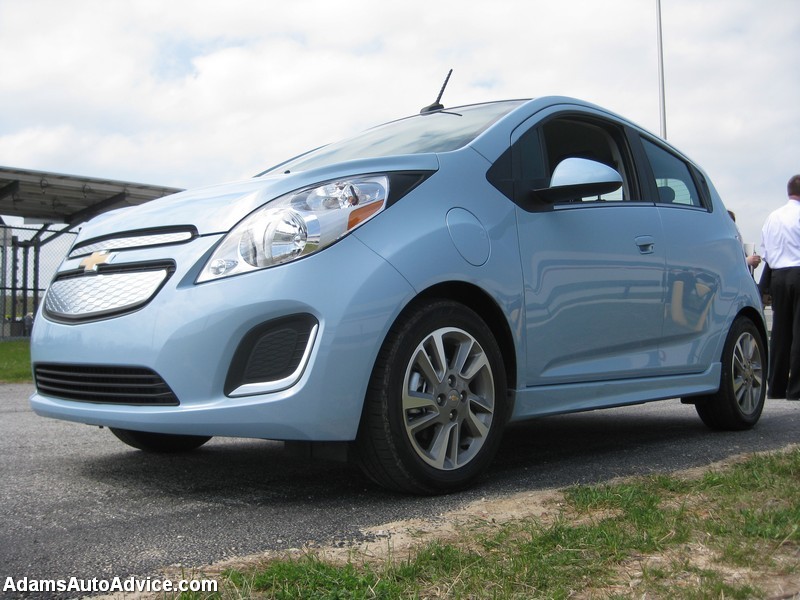 General Motors (GM) unveiled the start of production for electric motors that will be equipped on the 2014 Chevy Spark EV at the automakers' Baltimore facility in White Marsh, MD today.  (Ok, that is not technically Baltimore but it is close enough.)  This makes GM the first automaker to assemble and build electric motors in the US.  In addition the plant will also manufacture and assemble transmissions for the Spark EV.

The 2014 Spark EV will represent a big shift for GM.  While many point to the Chevy Volt's success, the company hasn't released a fully electric car that has been available to the public since the EV1.  We all know that the EV1 was a PR nightmare for GM and is it important to note that the EV1 was not available for the general car buying public to buy.  Oh, the times are changing though.

GM seems to be committed to building electric cars like the Spark EV and being environmentally friendly at the same time.  Not only will the GM Baltimore Operations be building electric car motors  and transmissions, but it also has a solar panel array on the Baltimore operations that generate 1.25 megawatts of electricity.  I was told this provides roughly 9% of the energy for the plant, which isn't a lot but that is not bad either.  The Baltimore facility is also 100% landfill free.  Materials are either burned for energy, recycled or reused for other projects.

Larry Nitz, GM's global electrification director, mentioned that the through the whole process of designing the Spark EV that GM was, and is, customer focused.  “Quiet, reliable, fun.” is how he described the Spark EV.

Having driven the Spark EV around the closed Baltimore operations facility, I do agree it is all three of those things.  It is surprisingly smooth and has good pick-up but certainly is not fast.  (Some fit and finish could use a some work though.)  It is hard to tell from a drive that only lasted 5-10 minutes and was not on real roads though.  As well you need to have a GM engineer making sure you aren't doing burnouts or anything.  That is something a particular auto writer might have suggested.

GM has not announced official pricing for the 2014 Spark EV but has said it should be under $25,000.  With a tax credit of $7,500 it should be affordable for the average consumer putting it right in the electric car market with the Nissan Leaf.  While the Spark EV seems like it will be fighter against the Nissan Leaf, Nissan has sold 50,000 Leafs since the car's introduction.  This makes the Nissan Leaf the best selling electric car of all time and most likely will be hard to catch-up with in terms of sales.  (The Prius does not count since it is a hybrid, which has a gas motor, in case you were thought “What about the Prius?.”)

GM has also not confirmed the exact date when the Spark EV will be available for sale.  Larry Nitz did say during lunch that only a select amount of Chevy dealerships will be selling the Spark EV.  This is the similar strategy that GM used for the Chevy Volt launch.  No word on how many GM expects to sell or what the electric motor output for the Baltimore plant is.  (I asked they didn't say or budge a bit.)

Since this was a big announcement for GM and the area as a whole.  Maryland Governor Martin O'Malley was on hand, as well Baltimore county executives, today to show his support for GM and the push to electrify the nations's vehicles.  Governor O'Malley even took a spin around in the Spark EV exclaiming as he got in, “I haven't done this in 13 years!”  I guess that shows how pampered politicians are! 🙂

You can see my video of Governor O'Malley taking the 2014 Spark EV for a spin.  I need to work on my video editing skills a lot though.  (Btw Windows Live Movie Maker sucks!)

One surprising guest I noticed at the event today was Debbie Phelps, Michael Phelps mom. I guess Debbie Phelps is now a celebrity in Baltimore so she gets invited to events like this Spark EV gathering.  My guess is that Michael Phelps, Baltimore's most famous and beloved athlete, could easily buy his mom a 2014 Spark EV (well probably like 20) without affecting his wallet too much.  She didn't drive a Spark EV, she just rode along in one, so I am unsure if she will be buying one in the future.

All in all it will be interesting to see what is next for the Baltimore facility in terms of manufacturing capabilities for electric motors and transmissions and if this will extend to other parts of the US.  As well what is next for GM and their electric car future.

Stay tuned for more articles about the Spark EV and Baltimore GM plant.